Wayanad; everlasting memories of a travel


Wayanad, a northern district of Kerala state (my state) in India is always a passion for our friend Nelson, who has worked there for many years before joining us in Thiruvananthapuram, the State Head Quarters of Kerala. Through his narrations we (the other friends) have also got attracted to the place. Usually every year, we conduct two-three days trekking tour. This time we have decided to select Wayanad. Anil Kumar, Anoop, Nelson, Dileep, Sabu, Gopikrishnan and me (Anil Prasad) arrived at Kalpetta, the head quarters of Wayanad district in the misty and cold early morning of 9th October, 2009 by KSRTC bus from Kozhikode. We were travelling the whole night from Thiruvananthapuram to Kozhikoe by train. Another friend Asokan would join as there. Asokan would also arrange a rented van for our local trips. After having tea from a small shop in front of the Kalpetta Civil Station, we went to the PWD Rest House to freshen up and to take breakfast. By 11 a.m the entire team got ready for the frist trip to Soochipara.

Soochipara
Soochipara is near Meppadi, around 23kms south of Kalpetta. After a 2-km walk from the car parking area into the dense equatorial forest we reached the three-tiered waterfalls in Soochipara that cascade down from a height of 100 to 300 feet - a breathtaking sight!.
The pool below the falls offer a great opportunity for swimming and bathing. The cliff face here is ideal for rock climbing. We enjoyed a great time here.

From Soochipara our next destination was Chembra Estate. This estate is at the foot of majestic Chembra Peak. It is near the town of Meppady and is 14 km west of Kalpetta, the district head quarters.  For people who prefer public transport, Kerala and Karnataka State Road Transport Corporations and a lot of private companies operate buses between Kozhikode (aka Calicut) and Bengaluru. People taking buses can get down at Kalpetta and catch another bus to Meppadi. During this travel , one has to take a deviation to the left at Chundale (about 6kms past Kalpetta). Meppadi is 11kms from Chundale, in the SH29.
As advised by forest officials we arrived at the Chembra Vana Samrakshana Samithi (VSS) Office in the evening of 9th October, 2009. Another Mr. Sabu, Executive Committee member of VSS was waiting for us there. since we have scheduled the trekking for 10th morning,  Sabu took us to see the Chembra estate bungalow, which is situated at the foot of Chembra Peak. The Bungalow was built in 1850 at the time of British East India Company. It is surrounded by beautiful garden & Tea estate.
When we entered the premises of the bunglow Mathan, an 80 yrs old estate keeper was cutting the grass in the front-yard landscaping. After a brief discussion with Mathan, Mr. Sabu rang up the estate superintendent and managed to get permission for us to see the interior of the buglow. Mathan opened the thick teak wood doors and we entered the amazing world of antique. The bungalow is reminiscent of the colonial era, with it’s antique structure, furniture, spacious bed rooms and stuffed animals.
From the estate buglow we went to the watch tower. The tower provides an eye catching view of the surrounding greenery and hills. Mr. Sabu has arranged our night stay in an estate quarters and Suresh has prepared a splendid supper for us. It was very intersting to hear the history of Chembra estate which is closely related to the fortunes and misfortunes of the lives of laborers.
Chembra Peak 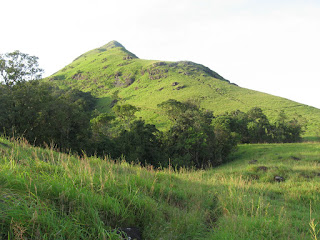 Chembra Peak, at 2100m (6980 ft) above sea level is the highest peak in Wayanad (northern) district of Kerala in India.  It is part of the Wayanad hill ranges in Western Ghats, adjoining the Nilgiri Hills in Tamilnadu and Vellarimala in Kozhikode district in Kerala. Chembra peak, accessible by foot from Meppady, is an idyllic spot for trekking and mountain climbing. District Tourism Promotion Council provides guides and trekking equipments on hire charges to the tourists.Permission from the forest office in Meppady is required for trekking up to the Chembra peak.
On 10th, we woke up early in the morning for the most awaited trekking to the Chembra Peak. This time our guide was Suresh, another VSS Volunteer. We started the trekking through the tea plantations at the foot of the peak. The trail was, very narrow, wet and slippery. Though the steep climbing felt difficult initially, the view of a rushing stream, verdantvegetation, and the beautiful yellow flowers had taken away all the pains.


A heart shaped lake en route to the top of the peak is a major attraction. The lake is believed to have never dried up. This fresh water lake is called 'Hridayasarassu'.

When you reach on the top of the Chembra Peak you will forget your pain and stress captivated by nature's magnanimous beauty. Definitely it will be an unforgettable experience.
Kuruva Island
From Chembra Estate we reached the Karuva by noon. Kuruva Island is situated on the tributaries of the river kabani. We crossed the river in the fibre boat of District Tourism Promotion Council to reach the Island. The serene silence and wide expanse of the evergreen forest of the Island was astonishing. This island has an array of uncommon species of birds, herbs and orchids. Kuruva Island is 17 kms to the east of Mananthavady in Wayanad.
Tholpetty Wildlife Sanctuary
From Kuruva we have arrived Tholpetty forest station by around 4.25 p.m. Tholpetty Wildlife Sanctuary is situated 20 km east of Mananthavady. This sanctuary has a wide variety of animals. We went deep into the sanctuary in a jeep. We had seen samba deer, monkeys and bison, but not fortunate enough to see elephants and tigers.

Popular posts from this blog

A trip to Sundarbans

July 02, 2009
Sundarbans
It was a fine Friday of 29th May 2009, the last day of the 5 day ‘Learning for Content and Community Building Workshop’ that I was facilitating for Commonwealth of Learning in association with Rupantar, a leading NGO, in Khulna, Bangaldesh. The fifth day was for field trip and casual discussions; a community building exercise.
In the morning, around 8 AM, Shaikh Abdul Halim, Co-ordinator of the workshop along with Md.Saifuddin Rony, Rohima, Maksuda Akther, Tauhid Alam and Md.Shafiqul Shaikh came to Hotel Western Inn International, where I was staying in Khulna, in a Van driven by our friend Jewel.

We planned Sundarbans as the first destination of the trip, and during the return journey we would also visit some places of historical importance.

The Sundarbans (Bengali: Shundorbôn) is the largest single block of tidal halophytic mangrove forest in the world. The name Sundarban can be literally translated as "beautiful jungle" or "beautiful forest" in the Bengal…
Post a Comment
Read more

January 31, 2013
Higher Education, General Education and Local Self Government Departments of Kerala State Government in India have jointly launched an Additional Skill Acquisition Programme (ASAP) as part of State Skill Development Programme to enhance the employability of students passing out of Higher Secondary Schools (+2) as well as Arts and Science Colleges in the state.
Historically Kerala has been a prominent supplier of skilled human resource to the rest of the world. But now, in accordance with the requirements of the fast changing world, though Kerala has an amazing pool of Human Resource, the overall employability is calculated below twenty five percent, the ASAP project document says.
Additional Skill Acquisition Programme has been conceived as an effective remedy for this situation. The whole idea is that the students will be given skill training, in addition to their regular academic programme/curriculum, in the crucial sectors as being demanded by the Industry. These skill training w…
6 comments
Read more